Looking to go to Walt Disney World in Florida in 2019?  There was already so much to do and see, it is hard to imagine there being even more attractions, resorts, etc. to see and do!

In 2019, we will see many new additions to make your stay a bit more magical!

There are new attractions and new dining venues for you to enjoy in Toy Story Land – now open in Disney’s Hollywood Studios!

At Star Wars: Galaxy’s Edge, guests will be transported to the planet of Batuu, a remote outpost on the galaxy’s edge that was once a busy crossroads along the old sub-lightspeed trade routes. Here, guests will find themselves in the middle of the action at two attractions that take detail and immersion to the next level: one that lets guests take the controls of Millennium Falcon on a customized secret mission, and an epic Star Wars adventure that puts guests in the middle of a climactic battle between the First Order and the Resistance.

Projected to open in fall 2019, Disney’s Riviera Resort will celebrate the grandeur of Europe—which has long inspired some of the greatest Disney stories with its castles and fairy-tale villages. Here, you can create your own great Disney story in the middle of the magic. At the end of each enchanting day, warm and stylish accommodations will welcome you, with a full range of options from cozy Tower Studios to spacious 1-Bedroom Villas, 2-Bedroom Villas and 3-Bedroom Grand Villas.

Take to the skies—travel by aerial gondola for a bird’s-eye view of various locations around Walt Disney World Resort!

Glide above the treetops and add an extra dash of pixie dust to your day.

Some of the gondolas are adorned with iconic Disney Characters, figures from Disney attractions and film favorites, which makes getting around even more magical as Guests enjoy breathtaking vistas over and between each of these enchanting locations!

The festival celebrates visual, performing and culinary arts. Once again, the Epcot Festival of the Arts will take place each day of the week! There are gallery exhibits, living statues, artist appearances and much more going on. The Disney on Broadway Concert Series inside the America Gardens Theatre will have nightly performances!

Epcot International Flower & Garden Festival is an annual event at Epcot each spring. This event features more than 100 topiaries spread throughout the park. There are an abundance of food offerings at the outdoor kitchens scattered around World Showcase to enjoy while admiring the character topiaries. Popular kitchens include the Urban Farm Eats, the locally grown Florida Fresh, Japan’s Hanami, the Smokehouse: Barbecue and Brews, and Bauernmarkt: Farmer’s Market featuring organic samplings with a German and Bavarian flare.

Included in your Epcot ticket is access to the Garden Rocks Concert Series!  Be sure to check out many of the favourites performing in Epcot during the 2019 International Flower and Garden Festival!!! 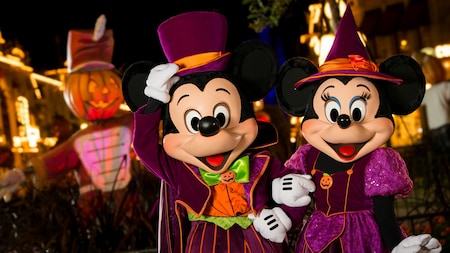 Get in the spirit with spellbinding performances, phenomenal fireworks, wickedly wild processions and more.
Each night, when darkness falls, the park comes to life with weird and wondrous one-of-a-kind experiences as frightful as they are delightful.
Thrill to a Halloween fireworks spectacular, special spooky shows and celebrations and our ever-popular Halloween parade, where favorite Disney Characters march in masquerade alongside stars from the Haunted Mansion. 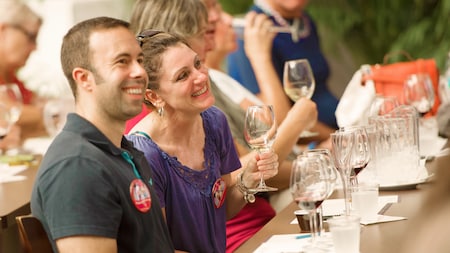 Highlighted from the 2018 Festival – here’s a sampling of what you might expect at this year’s events!

Here Comes Mickey… and Santa Too!

This Christmas season, get ready for a magical holiday gathering with your loved ones—and some familiar Disney faces.When Mickey celebrates the season, Magic Kingdom park lights up with excitement for Guests of all ages. Cinderella Castle shimmers. Joyful music fills the air. Disney Characters don their most festive attire. Favorite attractions take on a holiday theme. And enchanting surprises lie around almost every turn!

There you have it!  There’s so much to see and do this year that you really should plan a visit this year to see it for yourself!

Stop worrying about missing out!

Call us today to discuss your next family vacation! We can re-ignite the spark with your family by creating a hassle-free / worry-free family vacation that will #CollectMemoriesNotThings!